Anatomy and Physiology of the Cerebral Capillary Endothelia

The surface area of the brain microvasculature is ~ 100 cm 2·g-1 tissue, with the capillary volume and endothelial cell volume constituting approximately 1% and 0.1% of the tissue volume, respectively (Pardridge et al., 1990). The mean intercapillary distance in the human brain is ~ 40m m (Duvernoy et al., 1983). This short distance allows for near instantaneous solute equilibration throughout the brain interstitial space for small molecules, once the BBB has been overcome. The microvasculature of the central nervous system (CNS) can be differentiated from the peripheral tissue endothelia in that it possess uniquely distinguishing characteristics: 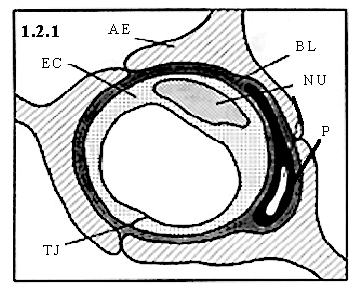 The intercellular clefts are around 200 Å wide, which would allow ready diffusion of tissue solutes, therefore it is clear that these clefts are constricted. The study of junctional complexes reducing diffusion across cellular sheets was initial investigated by Farquhar and Palade (1963). The complex is classified as macula and zonula adhaerens and zonula occludens. The adherens junction is around 200 Å, while the area composing the zonula occludens (i.e. tight junction) is essentially completely occluded. The junctional complex forms interconnected, intramembrane strands arranged as a series of multiple barriers (Schneebergter and Karnovsky, 1976).

Figure 2 depicts the current theoretical understanding of a cerebral capillary junction at the molecular level. An integral tight junctional membrane component is occludin, a 65 KDa protein brings opposing cell leaflets into contact. Claudins comprise a multigene family and to date there are 20 claudin isomers, which form dimers that bind homotypically to claudins on adjacent endothelial cells to form the primary seal of the tight junction (Furuse et al., 1999). Zonula occludens (ZO-1/2/3) are cytoplasmic proteins that interact with occludin and serve to as recognition proteins for tight junctional placement, and support structure for signal transduction proteins (Haskins, et al., 1998). ZOs belong to the MAGUK family of proteins (membrane associated guanylate kinase-like proteins) and have a number of binding sites for cytoskeletal proteins, signal transduction molecules, and kinases. AF6 is a Ras effector molecule associated with ZO-1 (Joh et al., 1997). 7H6 antigen is a phosphoprotein found at tight junctions impermeable to ions and macromolecules (Satoh et al., 1996). Junctional adhesion molecules (JAM) are localized at the tight junction and are a member of the immunoglobulin superfamily (IgSF). Additionally, tight junctions are shown to microdomains on the cell membrane rich in cholesterol, which contain caveolin-1 (Nusrat et al., 2000).

(2) The cytoplasm of the endothelial cell is of uniform thickness, with very few pinocytotic vesicles (hollowed out portion of cell membrane filled with fluid, forming a vacuole which allows for nutrient transport), and lack fenestrations (i.e. openings). Therefore, transit across the BBB involves translocation through (i) the capillary endothelium, (ii) the internal cytoplasmic domain, (iii) and then through the ablumenal membrane and pericyte and / or basal lamina. Three principle types of transendothelial transport have been postulated. These include vesicular channels (Simionescu et al., 1975), fusion-fission (Clough and Michel, 1981), and transcytosis (Palade, 1960).

Figure 1.2.2 A representative cross / longitudinal-section of a cerebral capillary of the BBB. Shown are the astrocytic end feet (AE), basal lamina (BL), and endothelial cell.(EC).

(3) There is a greater number and volume of mitochondria in BBB endothelial cells compared to peripheral endothelia in rat (Oledndorf et al., 1977). This increase in mitochondria, and increased energy potential, is thought to be required for active transport of nutrients to the brain from the blood. Oldendorf and Brown (1975) estimated that 5-6 times more mitochondria per capillary cross-section exist in rat cerebral capillaries than in rat skeletal muscle capillaries. These finding suggest that the enhanced cerebral capillary work capacity may be related to energy-dependent transcapillary transport.

(4) There is also an enzymatic barrier at the cerebral endothelia, capable of metabolizing drug and nutrients (Minn et al., 1991; Brownlees et al., 1993; Brownson et al., 1994). These enzymes are principally directed at metabolizing neuroactive blood-borne solutes. Enzymes such as g -glutamyl transpeptidase (g -GTP), alkaline phosphatase, and aromatic acid decarboxylase are in elevated concentration in cerebral microvessels, yet often in low concentration or absent in non-neuronal capillaries. A partial list of enzymes, and functions, involved in drug metabolism at the BBB is given in table-1

(5) Coomber and Stewart (1985) performed a comparative morphometric analysis of cerebral vs. muscle capillary endothelial cells and found a decrease in the wall thickness of brain capillaries of approximately 39%. Additionally, the number of pinocytotic vesicles of the muscle capillaries was seven times greater than those associated with the cerebral capillaries. They postulated that the decrease in wall thickness of the cerebral capillaries could be a modulation to the restrictive permeability of the BBB, allowing nutrients a shortened transport time to cross through the membrane and cytoplasm, and enter the brain parenchyma.

(6) A polarity exists between the lumenal and ablumenal membrane surfaces of the endothelial cells. The concept of the functional polarity of the BBB emerged from quantitative biochemical studies (Betz and Goldstein, 1978). The enzymes g -GTP and alkaline phosphatase are shown to be present at the lumenal endothelium, whereas Na+-K+-ATPase and the sodium dependent (A-system) neutral amino acid transporter are associated with the ablumenal portion of the endothelium (Betz et al., 1980). The glucose receptor GLUT-1 was shown, through use of immunogold labeling and electron microscopy, to have 3:1 ratio of distribution, ablumenal to lumenal at the BBB (Farrell and Pardridge, 1991). Na+-K+-ATPase is enriched at the ablumenal surface (Betz et al., 1980). Additionally, the P-glycoprotein (P-gp) drug efflux transporter is presently thought to exist at the lumenal membrane surface, although arguments that P-gp is actually associated with the astrocytes which enfold the endothelial cells (Pardridge, 1997) is presently being debated. Structural, pharmacological and biochemical evidence for lumenal and ablumenal polarization of receptors, enzymes, and channels at the cerebral endothelia (Vorbrodt, 1993) establishes the BBB to be a working non-stagnant membrane unequivocally evolved to maintain brain homeostasis. 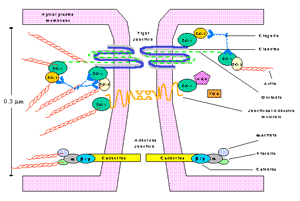