There are four basic mechanisms by which solute molecules move across membranes. First is simple diffusion, which proceeds from high to low concentrations. Second is facilitated diffusion, a form of carrier-mediated endocytosis, in which solute molecules bind to specific membrane protein carriers, also from high to low concentration. Third is simple diffusion through an aqueous channel, formed within the membrane. Fourth is active transport through a protein carrier with a specific binding site that undergoes a change in affinity. Active transport requires ATP hydrolysis and conducts movement against the concentration gradient. Movement between cells is referred to as paracellular diffusion (Karp, 1999). The BBB has a number of highly selective mechanisms for transport of nutrients into the brain (Figure 3 on the right).

Diffusion of substances into the brain can be divided into paracellular (i.e. between cells) and transcellular (i.e. across cells) diffusion, both of which are non-saturable and non-competitive. Paracellular diffusion does not occur to any great extent at the BBB, due to the "tight junctions". In the case of transcellular diffusion, the general rule is the higher the lipophilicity of a substance, the greater the diffusion into the brain (Pardridge, 1998). If two substances, identical on all other fronts, vary in molecular weight, the smaller substance will penetrate more rapidly; consequently small inorganic molecules (i.e. O2, CO2, NO, and H2O) are highly permeable. Additionally, hydrogen bond reduction of a compound will enhances its membrane permeability. Removal or masking of a hydrogen bonding donor group from a compound will effectively decrease the transfer energy from water into the cell membrane (Burton et al., 1996).

Simple diffusion is a spontaneous process depending on random movement of solutes. The free-energy change of a solute diffusing across a membrane is directly dependent on the magnitude of the concentration gradient. If the solute is a non-charged species (i.e. nonelectrolyte), the movement across the membrane is described by the following equation:

where D G is the Gibbs free-energy change (i.e the change during a process in the energy available to do work), R is the gas constant (1.987 cal/mol · ° K), T is the absolute temperature (in degrees Kalvin), and [Ci]/[Co] is the ratio of the concentration of solute on the inside (I) and outside (o) of the membrane.

Another important aspect of diffusion is that the time required for a molecule to diffuse between two points is the square of the distance separating the two points. Albert Einstein’s examination of theoretical aspects of diffusion (Einstein, 1905) resulted in the development known as the "Einstein relationship", which relates the time of diffusion to the distance traveled (i.e. the average molecular displacement; D X):

In the case of facilitated diffusion (a form of carrier-mediated endocytosis) there is a binding of a solute to a transporter on one side of the membrane that triggers a conformational change in the protein; this results in a carrying through of the substance to the other side of the membrane, from high to low concentration. Facilitated diffusion is passive (i.e. energy independent) and contributes to transport at the BBB of substances such as monocarboxyates, hexoses amines, amino acids, nucleoside, glutathione, small peptide, etc. (Tsuji and Tamai, 1999).

Receptor-mediated endocytosis (RME) provides a means for selective uptake of macromolecules. Cells have receptors for the uptake of many different types of ligands, including hormones, growth factors, enzymes, and plasma proteins. RME occurs at the brain for substances, such as transferrin (Fishman et al., 1987), insulin (Duffy and Pardridge, 1987), leptin (Banks et al., 1996), and IGF-I & IGF-II (Duffy et al., 1988), and is a highly specific type of energy dependent transport. Substances that enter a cell by means of RME become bound to receptors that collect in specialized areas of the plasma membrane known as coated pits. The coated pits contain the electron dense clathrin protein, and other proteins (Moore et al., 1987). When bound to ligand these pits invaginate into the cytoplasm and then pinch free of the plasma membrane to form coated vesicles. The clathrin vesicle coat is rapidly removed to form smooth-coated endosomes that form a compartment of uncoupling receptor and ligand (CURL) (Stahl and Schwartz, 1986). The endosomal membrane contains proton ATPases that result in acidification of the endosome interior, and dissociation of the ligand from the receptor within the CURL.

Absorptive-mediated transport (AME) is triggered by an electrostatic interaction between a positively charged substance, usually a charge moiety of a peptide, the negatively charge plasma membrane surface (i.e. glycocalyx) (Gonatas et al., 1984). AME has a lower affinity and higher capacity than receptor-mediated endocytosis. The development of many new drug delivery technologies focuses on AME (Pardridge, 1999).

Another significant transport mechanism at the BBB is carrier-mediated efflux. This mechanism is involved in extruding drugs from the brain and is a major obstacle for many pharmacological agents, with the ABC (ATP binding cassette) transporter P-glycoprotein being the principle efflux mechanism of these agents (Cordon-Cardo et al., 1989). There also exists efflux transporters for organic anions, via multidrug resistance associated protein (MRP) (Kusuhara et al., 1998), and anionic and cationic cyclic peptide (Tsuji, 2000). Additionally, the peptide transport system (PTS)-1 shows efflux transport of synthetic opioid peptide Tyr-MIF-1 (Banks et al., 1993). 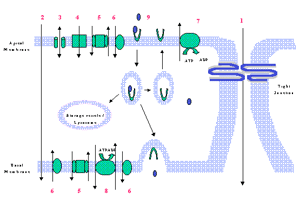